Text and the City:


For our first assignment of Ashley's module (being academic) we were asked to take three photo's of things that reminded us of Cardiff. I particularly enjoyed this task, as it allowed me to ‘explore’ Cardiff. However I found it hard to choose just three images to feature on my blog, as Cardiff has so many Iconic buildings. Originally I had planned to take photo’s of Cardiff Millennium Stadium and the Millennium Centre, as these both have strong connections with me. However as I ventured around cardiff I found the below pictures represented Cardiff and showed a true patriotic view of Cardiff. 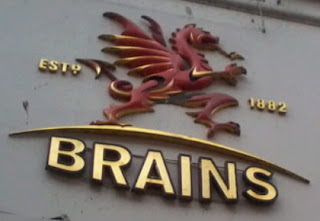 This is an iconic image for me when i think of Cardiff. There are many connotations to me when I see this image as ‘Brains’ beer sponsor’s Wales in international rugby. The emblem of the dragon helps to reinforce this idea of patriotism.  The image of a red dragon helps to reinforce the idea of  Wales, as the colour of wales is represented though the colour red.
There is a welsh ‘myth’ about a fight between a red and white dragon, from the book ‘The Mabinogion - Lludd and Llefelys’, Their pained shrieks cause women to miscarry, animals to perish and plants to become barren. Lludd, king of Britain, goes to his wise brother Llefelys in France. Llefelys tells him to dig a pit in the centre of Britain, fill it with mead, and cover it with cloth. Lludd does this, and the dragons drink the mead and fall asleep. Lludd imprisons them, still wrapped in their cloth, in Dinas Emrys in Snowdonia.
The dragons remain at Dinas Emrys for centuries until King Vortigern tries to build a castle there. Every night the castle walls and foundations are demolished by unseen forces. Vortigern consults his advisers, who tell him to find a boy with no natural father, and sacrifice him. Vortigern finds such a boy and on hearing that he is to be put to death to solve the demolishing of the walls, the boy tells the king of the two dragons. Vortigern excavates the hill, freeing the dragons. They continue their fight and the red dragon finally defeats the white dragon. The boy tells Vortigern that the white dragon symbolizes the Saxons and that the red dragon symbolizes the people of Vortigern. If Vortigern is accepted to have lived in the fifth century, then these people are the British whom the Saxons failed to subdue and who became the Welsh.
This image can be found all around Cardiff on different buildings, like pubs and on various entrances of arcades.

Before coming to University, I didn’t visit cardiff a great deal, only to go shopping or to watch a rugby game in the Millennium Stadium. Im a very patriotic girl, so its important to support Wales in rugby. However when I think of cardiff now, I think of university, more specifically UWIC. I like this picture as it very iconic and the blue writing helps the text stand out from the brick background. I choose to apply to UWIC as it offered an ideal course for me, and was perfect traveling distance from home, which allows me to have the benefits of student life and studying a university degree. Also the ability to have a home cooked dinner every evening.
In my opinion, I believe it is important to support you University and Course so here are some interesting facts about UWIC.
These are just a few facts among many of UWIC's achievements and Important history.


Also importantly this year UWIC was ranked within the top 70 university in the UK.

This picture is my favorite, it sum’s up my idea of Cardiff. Being from Chepstow (just before the severn bridge) there aren’t many shops, so when i think of Cardiff, shopping is quite important. The St. David’s centre is a new shopping building, the high glass makes the orange writing stand out, which helps make the building iconic to me. The building also has a strong welsh vibe, as there is a translation “Dewi Sant”. Having done welsh A level, I think its important to see welsh around Cardiff, as it is the Capital of Wales, also it connotes that Cardiff is bilingual.
Posted by Hollie Williams at 12:35